Candy has many uses in the game. At the beginning of the game, the only option you may select is "eat all the candies". After saving up 10 candies, they may be thrown on the ground. To unlock the rest of the game, 30 candies must be saved up to "request new features from the developer" in order to unlock the menu and primary features of the game.

When you reach a candy count of 42, \o/ will briefly flash to the right of the counter. This is most likely a reference to The Hitchhiker's Guide to the Galaxy, a book in which the answer to the question of everything is revealed to be 42. When 1337 candies are reached, the counter displays leet instead.

If you eat candies later in the game, you increase maximum health points. Due to the formula used, you can only increase your base HP to 1000 by eating candies, which takes 2,673,845 candies - any eaten beyond here will have no effect on your health. Eating additional candies after that will increase your rate of HP regeneration, up to a max of 500 hp/s (after 2,485,843,240 candies eaten), when out of combat.

"eaten" formulas (where exp(x) is e raised to x)

Slightly rounded - This many candies will get this many HP, but you might get away with a few less candies. This is before the bonus from the heart plug.

Note: this is a mid-to-late game technique. SPOILER ALERT IN THIS PARAGRAPH

The best farming method, where you will get about 2,700,000 candies a minute:

With the Boots of Introspection, the Enchanted Knight Armor, and the Merchant's Hat, one can farm around 2.75 million candies at the Castle Entrance every minute by using the black demon spell. The efficacy may rely on having a low magic cooldown, however. Farming The Devil increases profit by a factor of 5, but requires the player to continually restart the mission every time the devil is killed.

you need: the Giant Spoon, the merchants hat, Boots of Introspection. (Using the unicorn horn and pink enchanted gloves will make it an afk strategy.)

Visit the Castle Entrance quest and use Health Potions when needed. (However, unicorn horn and enchanted gloves will recover HP fast enough to make this a afk strategy.) The merchant's hat multiplier will rake in a lot of candies. You can also use Black Demons for faster candy-making.

To start, you need at least 10 candies to throw. When you start throwing them at first, not much will happen, except for an animation. It takes 1,000 candies on the floor for the side-quest to properly start. You can not do the side quest if the talking candy is there. The smiley will say things to you, dig a hole in which he finds a large room with a chest in it (you will get a Chocolate bar from there if you throw 1630 candies). After throwing 2220 candies on the ground, the smiley finds a room full of giant candies. Throwing further candies on the ground will do nothing, and the smiley will just keep eating the giant candies and saying *nom*. 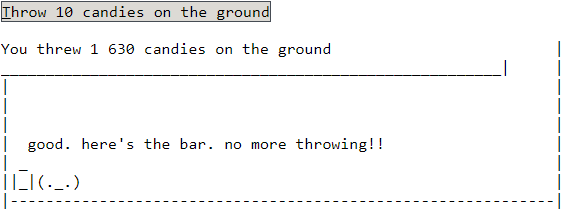