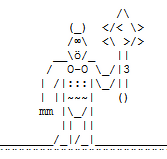 The Troll is an enemy you will fight on a bridge. It is very big and holds a large spiked club.

The Troll has 80 HP and drops 500 candies when killed.

The Troll can be considered a Boss, because it's Health bar is constantly showing, whereas other creatures only have their health bars shown while in combat.

Later on farming the troll becomes very simple as the fireball spell takes out 45 hp.

But in close combat, red gloves can defeat Troll, since fireballs comes from infront of you. thus hurt Troll more and can be defeat at 100 hp.